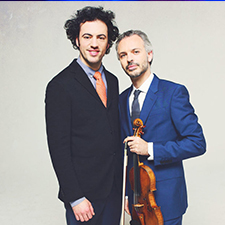 COLIN JACOBSEN
A 2003 Avery Fisher Career Grant recipient, violinist Colin Jacobsen first played to critical acclaim at the age of 14, collaborating with Kurt Masur and the New York Philharmonic in a performance that was hailed by The New York Times: “Jacobsen was the impressively accomplished soloist in Bruch’s Scottish Fantasy, sounding as if he were born to the instrument and its sweet, lyrical possibilities.” He recently returned to the New York Philharmonic in a performance of Brahms’ Double Concerto with cellist Yo-Yo Ma, and David Zinman conducting. Mr. Jacobsen’s wide-ranging musical activities are part of a generational wave that is taking classical music into a much broader context. As a soloist, he continues to play with orchestras worldwide, including the YouTube Symphony and those of Albany, Charleston, Chicago, San Francisco, Nashville, and Philharmonia Baroque. He has performed with the Chamber Music Society of Lincoln Center, as a member of the Metropolitan Museum Artists in Concert, and has collaborated with musicians such as Emanuel Ax, Joshua Bell, Kim Kashkashian, Mark O’Connor, Phillip Glass, Steven Isserlis, Christian Tetzlaff, Mitsuko Uchida, and Jan Vogler. Mr. Jacobsen’s summer festival appearances have included Banff, Caramoor, Marlboro, Mostly Mozart, Ravinia’s Steans Institute, Salzburg, and Tanglewood.

As a touring member of the Silk Road Ensemble since its conception by Yo-Yo Ma, Mr. Jacobsen has been part of a creative cauldron that has continually pushed him to expand his boundaries. Through exposure to musicians like the Persian kemanche virtuoso Kayhan Kalhor, vocalist Alim Qasimov, and pipa player Wu Man, he has been inspired to compose and arrange pieces both for the Ensemble and for other groups. Mr. Jacobsen is a co-founder along with his brother, the cellist and conductor Eric Jacobsen, of the string quartet Brooklyn Rider and the chamber orchestra The Knights. Both ensembles tour worldwide and have issued acclaimed albums featured by NPR as top classical picks for 2008 and 2012, respectively. In December 2012, Colin Jacobsen was selected, with his brother Eric, from among the nation’s top visual, performing, media, and literary artists to receive a prestigious United States Artists Fellowship, which carries an unrestricted grant of $50,000.

ERIC JACOBSEN
Hailed by The New York Times as “an interpretive dynamo,” conductor and cellist Eric Jacobsen has built a reputation for engaging audiences with innovative and collaborative programming projects. As co-founder and conductor of the adventurous orchestra The Knights and a founding member of genre-defying string quartet Brooklyn Rider, he may take credit for helping to ensure “the future of classical music in America” (Los Angeles Times).

Eric Jacobsen is dedicated to imaginative programming and projects that invite audiences into a shared experience. As conductor of The Knights, an ensemble he co-founded with his brother Colin to bring the intimacy and camaraderie of chamber music to the orchestral stage, Mr. Jacobsen has led the orchestra in performances, tours, and recording projects. In September 2012, Mr. Jacobsen will lead The Knights in concerts with Yo-Yo Ma, Itzhak Perlman, and Dawn Upshaw at the Ravinia Festival. In December 2012, Mr. Jacobsen was selected, with his brother Colin, from among the nation’s top visual, performing, media, and literary artists to receive a prestigious United States Artists Fellowship, which carries an unrestricted grant of $50,000.

Under Mr. Jacobsen’s baton, The Knights opened the 2009 Dresden Musikfestspiele with Beethoven’s Seventh Symphony and Osvaldo Golijov’s arrangement of Schubert songs with soloist Dawn Upshaw. Mr. Jacobsen has led concerts with Mr. Ma and The Knights at Caramoor, and has led multiple tours across Germany with The Knights and cellist Jan Vogler to standing ovations at the Cologne Philharmonie, Dusseldorf Tonhalle, and Berlin Radialsystem. This fall, The Knights will release their third album on SONY Classical with Mr. Jacobsen as conductor. As guest conductor, he has appeared with the Detroit Symphony Orchestra and Camerata Bern in the European premiere of Mark O’Connor’s American Seasons, with the composer as soloist.

As a cellist, Mr. Jacobsen has collaborated with Gil Shaham and Adele Anthony. He has toured worldwide as a member of Yo-Yo Ma’s Silk Road Ensemble, with appearances in Azerbaijan, China, Hong Kong, Japan, Malaysia, Switzerland, the Art Institute of Chicago, and the Hollywood Bowl.

As a founding member of the string quartet Brooklyn Rider, Mr. Jacobsen has toured extensively in North America and Europe. An avid educator, Mr. Jacobsen is on the faculty of New York University. He conducts the NYU Orchestras and teaches chamber music and cello.