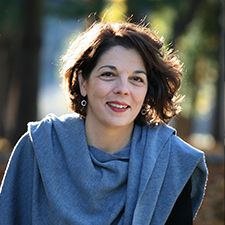 Acclaimed for her beautiful clarion tone, power and natural musicianship, Louise Fauteux is regarded as one of the most versatile sopranos performing today. That versatility has allowed her opportunities with some of todays most celebrated institutions and musicians including; a solo role in Peer Gynt with the New York Philharmonic under Kurt Masur, a theatrical version of the St. Matthew Passion at the Brooklyn Academy of Music directed by Jonathan Miller, a tour of Venice with DiCapo Opera and the Fairfield Chorale as soloist under conductor Johannes Somary, and opera arias with the Jenaer Philharmonic in Weimar, Germany. She also performed live at the Knitting Factory for a Leonard Cohen tribute (NYC) in 2004. Ms. Fauteux has sung the roles of Pamina in The Magic Flute, Belinda from Dido and Aeneas, Gretel from Hansel and Gretel, Violetta from La Traviata, and Lucy from The Telephone, among others. She was a finalist in the MacAllister Awards national operatic competition, and has received awards and honors from the Bethlehem Bach Festival, Connecticut Opera and the Carmel Bach Festival.

As a chorister Ms. Fauteux has had the opportunity to perform alongside the Mark Morris Dance Company, to premiere Michael Torke’s “Four Seasons” with the New York Philharmonic, and to tour France, Korea and Taiwan with the acclaimed Westminster Choir under Joseph Flummerfelt. She also participated in Marlboro Music Festivals with the Blanche Moyse Chorale.

An active performer in the Northeastern United States, Ms. Fauteux’s appearances include Beethoven’s Ninth Symphony with the Chappaqua Orchestra, Varese chamber songs at Columbia University with Alarm Will Sound, and Orff’s Carmina Burana with the Connecticut Master Chorale.

Louise Fauteux was asked by the Charles Ives society to record “Borrowed” Tunes for the catalogue of Ives’ music found at www.charlesives.org. She has also recorded popular music for Dreamcatcher Studios and Bright Lights music, and has made appearances on Channel 3’s “Better Connecticut” morning television show with Scot Haney.

Currently, Ms. Fauteux is the resident artist for the Cathedral of Saint Joseph and music instructor for A.I. Prince Technical High School in Hartford. She served as adjunct voice faculty for the Hartt School of Music for sixteen years. Ms. Fauteux completed a Master of Music in Vocal Pedagogy and Performance from Westminster Choir College, and earned a Bachelor of Music in Music Education from Keene State College.