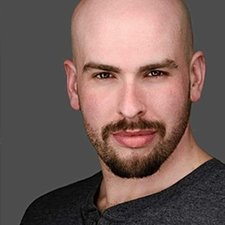 Alexander Patrie, bass, is a teacher, vocalist, and multi-instrumentalist whose passion is to heal the world with music. As a performer, Patrie is a multi-faceted artist with an uncanny ability to captivate audiences. Alexander is a guitarist, pianist, and vocalist who “crosses genres” and “wins-over hearts”. Alexander has been performing with CONCORA since 2013 under the batons of both Richard Coffey and Chris Shepherd. Alexander has appeared as a soloist throughout many CONCORA concert seasons, and is also a prominent soloist in the Northeast region. Alexander appeared as a soloist with CONCORA in the captivating performance of Matthaus passion under the baton of Chris Shepherd in 2018. Alexander recently appeared as Bartolo in the Norwalk Symphony Orchestra concert staging of Le Nozze di Figaro. As a passionate teacher, conductor, and musical leader, Alexander also holds many posts. He is the Music Director for K-8 Studies at St. Aloysius School in New Canaan, Youth Music Program Director at UCC Bridgeport, and Choral Director/Music Theory instructor at the Stamford Academy of Art and Music. Alexander is also a passionate songwriter and producer. He is currently Co-Creative Director for FaTE (Fernanda and the Ephemeral); a live, multi-media musical experience. His band uses graphic art to depict a socially uplifting narrative that works in conjunction with their original music.