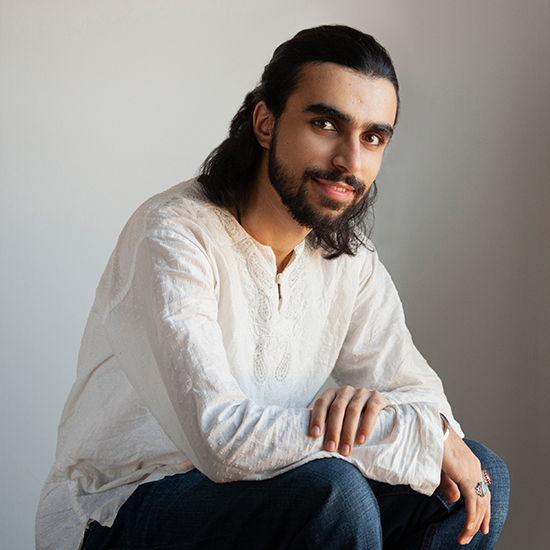 Milad Yousufi is a pianist, composer, conductor, poet, singer, painter and calligrapher who is deeply inspired by his Afghan culture and heritage. He is the first Afghan-influenced western classical composer.

Mr. Yousufi was born in 1995 during the civil war in Afghanistan. Under Taliban rule, music was completely banned. As a very young child he painted the piano keyboard on paper to quietly practice. When Taliban rule was lifted he took advantage of every opportunity to study music and art. At age twelve he was teaching painting and attending Kabul’s one music school, and he soon won an international piano competition in Germany and began performing internationally.

Milad started drawing at the age of 2, and officially enrolled to Ghulam Mohammad Maimanagi Art Center at age 5 where he started learning Persian and Arabic Calligraphy. At age 7 he started taking drawing classes and at the age 12 he become teacher assistant at Afghan Art Center. He has exhibited his paintings – in oil, watercolor, pastel and oil pastel – in 2014 at Paknegar Art Center. and in 2015 he started a mural painting at Afghanistan National Institute of music where he was a faculty member.

In Afghanistan Mr. Yousufi taught piano, theory, and a course on Sibelius at the Afghanistan National Institute of Music. When the Afghan Youth Orchestra was formed in 2011 he became the pianist and the first Afghan conductor, and arranged music for their performances. The orchestra performed sold-out concerts at Carnegie Hall, The Kennedy Center, and at The New England Conservatory, where Mr. Yousufi performed as pianist.

Mr. Yousufi moved to the U.S., where he won a full scholarship to Mannes School of Music and studies piano with Simone Dinnerstein. He has composed Afghan-influenced music for The New York Philharmonic Chamber Orchestra and The Refugee Orchestra Project, and has had additional commissions, including from the Kronos Quartet and Music Worcester.