The only pianist currently performing Liszt’s 24 Etudes as a single program and one of few to tout a concerto list that features over 60 works, Asiya Korepanova is a pianistic powerhouse and rapidly rising star. A result of her uncompromising dedication to the arts, Ms. Korepanova is recognized not only for her achievements as a pianist, but also for her work as a transcriber, composer, visual artist, and poet.

A number of her transcriptions have been recorded through her YouTube vlog project, ‘Midnight Pieces’. Launched in September, 2017, Asiya shares 53 performances of short works. Among these are well-known works, Russian compositions, obscure works, and original transcriptions.

Uninhibited in her artistic expression, Asiya’s communicative desires have culminated in several projects featuring original poetry and visual art that serve as an interpretive commentary to a particular cycle of works for the piano. These cycles include Liszt’s Transcendental Etudes, Bach’s Well-Tempered Clavier, Tchaikovsky’s 18 Morceaux, Op. 72 and, most recently, Mussorgsky’s Pictures At An Exhibition. Asiya’s live performances of these compositions have astounded audiences and organizers alike.

…a true modern Renaissance woman…what a beautiful and rich palette of human depth and creativity! 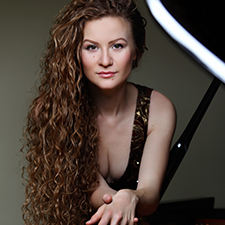