Adolphe Adam’s masterpiece returns to The Hanove Theatre in a new production by the Russian National Ballet. A romantic tale complete with intrigue, heartbreak, ghosts, and revenge, Giselle has been a repertoire staple across the globe since its premiere in 1841 in Paris.

The Russian National Ballet has been bringing timeless ballet classics to the stages of North America since 1999. Founded in Moscow during the transitional period of Perestroika in the late 1980s, the company used their new-found creative freedom, influenced by the political movement, to invigorate the tradition of Russian Ballet with new developments in dance from around the world. In 1994, the legendary Bolshoi principal dancer Elena Radchenko was selected by Presidential decree to assume the first permanent artistic directorship of the company. Ms. Radchenko is the founder of the Russian National Ballet, focusing on upholding the grand national tradition of the major Russian ballet works and developing new talents throughout Russia, with a repertory of virtually all of the great full works which continue to enlighten, inspire, and entertain audience across the continent.

The Russian National Ballet, directed by Elena Radchenko,
is a cut above many of its rivals.

ACT I
A Rhineland Village

Plus the Corps de Ballet

Act I:  A Rhineland Village

Giselle, a peasant girl, has fallen in love with Count Albrécht, who has led her to believe that he is a villager named Loys.  Her superstitious mother, Berthe, hoping that Giselle will marry the forester Hilarion, warns her against Loys, to whom she has taken an instinctive dislike.

In order to discourage Giselle’s love for ‘Loys’, Berthe further recounts the legend of the Wilis – ghosts of young girls who have been jilted and die before their wedding day: to avenge themselves, they dance to death any man who crosses their paths between midnight and dawn.  But Giselle disregards her mother and joins, with her beloved, in the celebrations that mark the end of the grape harvest, when she is crowned Queen of the Vintage.

Wilfred, Albrécht’s squire, secretly warns him that a hunting party is approaching, led by the Duke of Courland and the Countes Bathilde (Albrécht’s future bride), who are staying at Albrécht’s castle for the betrothal ceremony.  Albrécht hides, but Hilarion has witnessed this meeting and decides to break in to ‘Loy’s’ cottage to discover the secret of his identity.  The hunting party arrives.  Giselle dances for the nobles and when she tells Bathilde that she too is engaged, the Countess gives her a necklace.  Bathilde, tired from hunting, asks to rest in Berthe’s cottage, but the Duke decides to continue the hunt and orders a hunting horn to be left by the cottage door so that he and the rest of the party may be recalled when Berthe is ready to rejoin them.  Hilarion now reappears from “Loys’s cottage.  He has found Albrécht’s sword and when he compares it with the hunting horn, he sees that they bear the same crest; this gives him the evidence for which he has been looking.  Not realizing that the hunt is still nearby, Albrécht returns.  Hilarion interrupts the dancing and reveals the truth about ‘Loys’.  He sounds the horn, the hunting party returns and Bathilde, coming out of the cottage, claims Albrécht as her fiancé.  The shock is too much for Giselle and she loses her reason.  In her madness she relives her love for ‘Loys’ and, seizing his sword, she kills herself.

Hilarion keeps vigil by Giselle’s grave, which lies deep in the forest in unconsecrated ground.  It is midnight, the time when the Wilis materialize.  Hilarion flees in terror when confronted by these apparitions.  Myrthe, their queen, now arrives from the marshes and summons her Wilis.  She draws Giselle from her grave to be initiated into their rites.  The Wilis disperse as Albrécht approaches, searching for Giselle’s grave.  He lays flowers at the cross and when Giselle’s spirit appears to him, he follows it into the forest.

Hilarion, pursued by the Wilis, returns and is forced into an endless dance.  Exhausted, he is driven into the lake, where he drowns.  The Wilis now seek out Albrécht and when Myrthe commands him to dance, Giselle urges him to the safety of the cross, but

he is powerless when Myrthe orders Giselle to entice him away by dancing with him.  Giselle tries to sustain him, but as the night wears on he becomes weaker and weaker.  Just as he is about to die, dawn breaks.  Daylight destroys the Wilis’ power and the ghostly dancers fade away; Giselle, whose love has transcended death, returns to her grave, her spirits freed from the power of the Wilis, leaving Albrécht sorrowing and alone.

Giselle: The Music and Its Creator

Adolphe Adam was born in 1803 in Paris.  His father, Louis Adam, came from Alsace and was a well-known pianist, professor at the Conservatoire and author of a best-selling piano method.  Surprisingly, he was opposed to any musical education for his son, but eventually allowed him to enter the Conservatoire.  After a slow start Adolphe became a pupil of Boieldeu, composer of La Dame Blanche, and began to write with remarkable facility.  At 22 he received the Second Prix de Rome and in 1830 his opera Danilova was presented at the Opéra Comique.  During the next 18 months he composed four operas, all staged in Paris.  He married the sister of Pierre Laporte, director of the Covent Garden Theatre.  This connection brought him to London in 1832 for the premieres of his two English comic operas, The First Campaign and The Dark Diamond, and a year later he returned with a ballet score, Faust, for the King’s Theatre.

More than 50 stage works followed, many of them enormously successful, including the comic operas Le Chalet, Le Postillon de Longjumeau, La Poupée de Nuremberg, Si j’étais Roi and the ballets Le Diable á Quatre, La jolie fille de Gand, La Fille du Danube, Le Corsaire and of course, Giselle, his acknowledged masterpiece.  Adam became one of the most popular composers of his time, as well-known in Berlin and St. Petersburg as in Paris and London.  His last stage work was a delightful one-act operetta, Les Pantins de Violette, given its premiere on April 29, 1856 at Offenbach’s Bouffes-Parisiens.  Adam died in his sleep four nights later.

The apparent simplicity of Adam’s music is deceptive because the piano editions of his operas and ballets, published for sale to a mass market of amateurs, required such basic presentation.  He was in fact expert at creating instant theatrical effects with short melodic motifs tailor-made for character or situation and with unexpected harmonic progressions to control the audience’s emotional tension.  Like his compatriots Auber and Hérold, similarly involved in opéra comique, he benefited from the influence of Rossini and Donizetti, and if all three were inevitably under the shadow of Meyerbeer when attempting grand opera, they were nonetheless totally successful in providing high-class entertainment for most of Europe for well over half a century.

Adam’s accounts of composing Giselle vary: in one place he recalls having written the score in eight days, elsewhere he mentions three weeks.  The historian Ivor Guest has examined a manuscript score which records dates of completion for separate sections, ranging from April 11, 1841 to the last entry on June

Adam may well have been referring to first sketches. At any rate he seems to have enjoyed the collaboration between himself, the rising young star Carlotta Grisi, and her choreographer-mentor Jules Perrot: ‘I composed the music in high spirits.  I was in a hurry and that always fires my imagination.  I was very friendly with Perrot and Carlotta, and the piece evolved, as it were, in my drawing room.’

Although Giselle was not the first ballet to adopt an elementary Leitmotif procedure, it is certainly the earliest that is still in the repertory.  The first act contains more examples of this device than the second, because the first lends itself more to the mime scenes necessary to establish the plot in the earlier part of the ballet than it does to set dance pieces. One obvious example is the short, stabbing, unharmonized motif associated with Hilarion, another is the repeated and flexible use of the love theme for Giselle and Albrécht, recalled towards the end of the first act in fragmented form and chromatically raised pitch layers.  The set dance sections are composed in the form of their aria and ensemble counterparts in operas of the time:  quadrilles, waltzes, polaccas, galops, nocturnes or tarantellas. Adam uses these forms with a certain freedom and juxtaposes them effectively.

The enormous popularity of Giselle has had a curious effect on its music. Since the mid 19th century, the numerous productions in different countries have brought about many changes of detail in choreography and scenario.  It was not normal practice to import orchestral material for new productions of ballets of that period.  The choreographer would rehearse the dancers to the sound of one violin, sometimes two, playing from a violin conductor part, prepared from the original score.  An orchestration would then be ordered from a local musician, inevitably reflecting whatever changes had been made.  That is why the great centers of ballet culture have inherited variants of the original music and its instrumentation.  Adam’s orchestral score was never published and the foregoing comments may perhaps explain why there had been no urgent search for it. 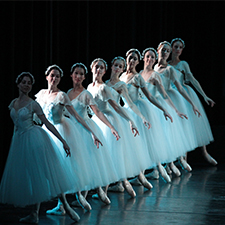 In 1994, the legendary Bolshoi principal dancer Elena Radchenko was selected by Presidential decree to assume the first permanent artistic directorship of the company. Ms. Radchenko is the founder of the Russian National Ballet, focusing on upholding the grand national tradition of the major Russian ballet works and developing new talents throughout Russia, with a repertory of virtually all of the great full works which continue to enlighten, inspire, and entertain audience across the continent.

Claudia Schreier has been praised for her distinctive choreographic voice, which fuses neoclassical technique with a contemporary vocabulary. Born in New York, Ms. Schreier trained at the Ballet School of Stamford under the direction of Stephanie Marini and received a B.A. in Sociology and Secondary Degree in Dramatic Arts from Harvard University in 2008.

Ms. Schreier's most recent awards include the 2018 Princess Grace Award for Choreography, the 2018 NEFA National Dance Project Award, the 2018 Dance/NYC Dance Advancement Fund supported by the Ford Foundation, and the 2017 Lotos Foundation Prize for Dance.

Ms. Schreier has choreographed over 25 ballets including the premiere of Passage for Dance Theatre of Harlem (co-commissioned by the Virginia Arts Festival and the Kennedy Center).

She is the Artistic Director of Claudia Schreier & Company, which since 2015 has presented several full-evening performances of her choreography featuring dancers from New York City Ballet, American Ballet Theatre, Miami City Ballet and Dance Theatre of Harlem, among other leading companies, and collaborations with composers and musicians, including Emmy Award-winning composer Jeff Beal, Juilliard composer Will Stackpole, and chamber choir Tapestry.

Her TEDx talk "Thinking On Your Feet," was presented at Columbia University.

The company was founded in 1989 as the Moscow Festival Ballet - under the direction of famous dancer of the Bolshoi Theatre Sergei Radchenko- Honored Artist of Russia The first independent company of classical ballet began to develop rapidly and a lot of touring in many countries. In this regard, it was decided to create extra troupe Russian National Ballet theatre, under the direction of Elena Radchenko – soloist dancer of Mariinsky- Kirov Theatre and Bolshoi Theatre. At this time, both the troupe successfully work within the company Russian National Ballet S.Radchenko more than 25 years.