Pre-recorded concert with flexible viewing option(s).
ON-DEMAND concerts are pre-recorded. You have more flexibility to view this concert according to you schedule, but within a limited date range set by the artist.

Music Worcester proudly presents violinist Joshua Bell in a virtual performance filmed from his home with pianist Alessio Bax. The on-demand performance video becomes available to buyers on October 16 at 8:00 PM and features a program of works by Bach and Franck, with encores and a post-concert Q&A for VIP buyers.

Asiya Korepanova is a pianistic powerhouse and rapidly rising star. Music Worcester brings you her rare program of Liszt's complete 24 Etudes in a virtual presentation filmed at historic Mechanics Hall.

From the candlelit chant procession to the triumphant gospel conclusion, A Chanticleer Christmas offers joy and transcendence through beautifully sung music of all centuries from classical to carols. Buyers can enjoy this performance video On Demand starting December 12, 2020 at 8:00 PM. 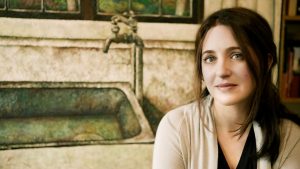 Praised by critics for his passionate expression and dazzling technique, pianist Andrew Armstrong has delighted audiences across Asia, Europe, Latin America, Canada, and the United States. His trio recital, recorded at Mechanics Hall with clarinet and violin, features works by Stravinsky, Schumann, Shostakovich, and more. 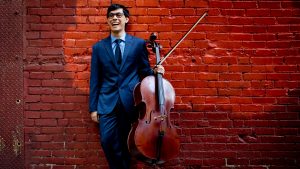 Former Music Worcester Young Artist Competition winner and the first American in four decades and youngest musician ever to win First Prize at the International Tchaikovsky Competition Cello Division, Zlatomir Fung is poised to become one of the preeminent cellists of our time. 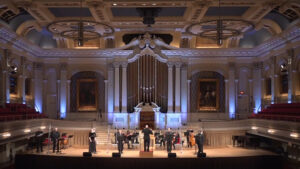 Chris Shepard directs a socially distanced ensemble of vocalists and the Worcester Festival Chamber Orchestra in a presentation of Mozart's Requiem from historic Mechanics Hall. Viewers can enjoy On Demand viewing for a full month starting March 26 at 7PM. 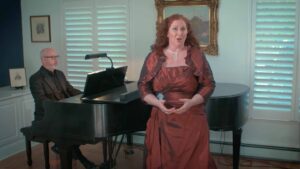 Soprano Esther Heideman, who has sung with the Worcester Chorus on many occasions, joins Chris Shepard in a recital featuring music from throughout Europe. Sign up for a free ticket to enjoy this virtual concert On Demand now through August 20.

“Angelic” is the word most often used to describe the silvery, pure, sweet tone of Esther Heideman’s voice. A winner of the Metropolitan Opera National Council Auditions and the Lucia Albanese Competition, Esther Heideman continues to impress audiences around the world with her dynamic stage presence. Ms. Heideman has even been described as having Stradivarius vocal cords.

Esther took her first voice lesson when she was 18 and already attending college. Her passion for performing emerged quickly, and she has dedicated her life to it ever since. In 2001, she made her Metropolitan Opera debut singing Pamina in Mozart’s Die Zauberflöte. That performance was immediately followed by her debut with the New York Philharmonic, and her European debut with the Prague Radio Symphony.

In addition to performing the staples of traditional concert repertoire, such as Beethoven’s Symphony # 9, Mahler’s Symphony #4, Mozart's C minor Mass, Handel's Messiah and Orff's Carmina Burana, Esther Heideman has featured prominently in the premieres of some of today's most respected contemporary composers. These have included the role of Jenny Lind in Libby Larsen’s opera Barnum’s Bird, Sister Angelica in The Three Hermits by Stephen Paulus, Madame V in Casanova by Daniel Schnyder, The Revelation of St. John by Daniel Schnyder, and Deus Passus by Wolfgang Rihm. Ms. Heideman also performs regularly with the Aspen Contemporary Ensemble, and has sung works by Szymanowski, Schoenberg, Essa-Pekka Salonen, Perrera, Druckman, Ravel, Delage, and Albert, to name a few.

Upcoming performances include Lucas Foss Time Cycle with the Aspen Music Festival, Songs of the Season/Christmas with Choral Arts Society (at Kennedy Center) and Beethoven’s Symphony # 9 with the National Philharmonic. Esther is also featured on a live recording of Evan’s Ireland’s Poet Patriots from the National Cathedral, to be released in October 2018. When not performing, Ms. Heideman enjoys teaching lessons and master classes and sharing her knowledge and experience with young performers.

Artistic Director of the Worcester Chorus since 2009, Chris also serves as Artistic Director of the Connecticut Choral Artists (CONCORA) in Hartford and the Masterwork Chorus of New Jersey. His choirs have collaborated with a number of orchestras, such as the Juilliard Orchestra, the Orquestra Sinfónica Nacional de Mexico and the Hartford Symphony Orchestra, in venues that include Carnegie Hall, Lincoln Center and Radio City Music Hall in New York, as well as the Royal Festival Hall in London and the Palacio de Bellas Artes in Mexico City. Chris has prepared choirs for major international conductors, including Yannick Nézet-Séguin, Simone Young, Carlos Miguel Prieto and William Boughton, as well as for Broadway legend Patti Lupone and Ray Davies of the Kinks. He made his Carnegie Hall debut in 2015, and made his conducting debut with the New Haven Symphony in 2016.

Chris returned to America in 2008 after a dozen years in Sydney, Australia, where he founded the Sydneian Bach Choir and Orchestra. He led their BACH 2010, a project to perform all of Bach’s choral cantatas. Under his direction, the ensemble performed over eighty cantatas, as well as the two Passions, B Minor Mass, and Christmas Oratorio; they completed the cantata cycle in 2013. In addition to the music of J.S. Bach, Chris has conducted many staples of the choral-orchestral repertoire, and he has commissioned and premiered a number of new choral works in both Australia and America. He also leads two of the longest-running annual Messiah performances in America, with the Worcester Chorus at Mechanics Hall, and at Carnegie Hall with the Masterwork Chorus.

A committed music educator, Chris has served on the faculty of the Taft School, Sydney Grammar School, Hotchkiss Summer Portals, and Holy Cross College. He founded the Litchfield County Children’s Choir in 1990, and has conducted numerous middle and high school festival choirs in New England, New York and Australia. He presented two documentaries with SBS-TV, an Australian national public television network, and has given several presentations at conferences for American Choral Directors Association and Australian National Kodàly Association. Chris has been a guest conductor at Emmanuel Church in Boston, a church renowned for its four-decade Bach cantata project, and he currently serves as Music Director of St John’s Episcopal Church in Stamford, Connecticut. He led the Dessoff Choir in New York City from 2010 to 2016.

A pianist and keyboard continuist, Chris holds degrees from the Hartt School, the Yale School of Music (where he studied choral conducting with Marguerite Brooks) and the University of Sydney. He researched the performance history of Bach’s B Minor Mass in New York City for his PhD in Musicology; his dissertation won the American Choral Directors Association’s 2012 Julius Herford Prize for outstanding doctoral thesis in choral music.