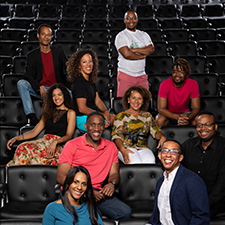 Chineke! was founded in 2015 by the double bass player, Chi-chi Nwanoku OBE, to provide career opportunities for young Black and Minority Ethnic (BME) classical musicians in the UK and Europe.

The Chineke! Orchestra, the Foundation’s flagship ensemble, works closely with its sister ensemble, the Chineke! Junior Orchestra, a youth orchestra of BME players aged between 11 and 22, with senior players acting as mentors, teachers and role models to the young musicians.

In 2017, the Chineke! Orchestra made its BBC Proms debut at the Royal Albert Hall in August and performed at many other leading festivals throughout England, all to great critical acclaim. Chineke! has released two albums over the past year with more planned in 2019.

The Chineke! Ensemble comprises the principal players of the Chineke! Orchestra. It has performed in Manchester in 2017 and made its debut at Wigmore Hall in 2018 before going on to play at the Cheltenham and Ryedale festivals. In the autumn of 2018, the ensemble performed at the Tonbridge Music Club, Wimbledon International Festival, Cambridge Music Festival and at St George’s Bristol.

Chineke!’s founder, Chi-chi Nwanoku OBE, says: ‘My aim is to create a space where BME musicians can walk on stage and know that they belong, in every sense of the word. If even one BME child feels that their colour is getting in the way of their musical ambitions, then I hope to inspire them, give them a platform, and show them that music, of whatever kind, is for all people.’