Buyers choose their own assigned seats for this presentation at Tuckerman Hall. 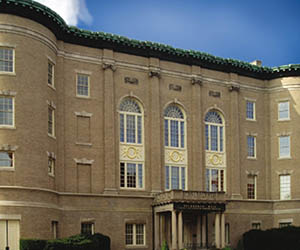 Simone Dinnerstein is an American pianist. She lives in Brooklyn, New York with her husband and dog, less than a mile from the hospital in which she was born.

Simone has a distinctive musical voice. The Washington Post has called her “an artist of strikingly original ideas and irrefutable integrity.” She first came to wider public attention in 2007 through her recording of Bach’s Goldberg Variations, reflecting an aesthetic that was both deeply rooted in the score and profoundly idiosyncratic. She is, wrote The New York Times, “a unique voice in the forest of Bach interpretation.”

Since that recording, she has had a busy performing career. She has played with orchestras ranging from the New York Philharmonic and the Montreal Symphony Orchestra to the London Symphony Orchestra and the Orchestra Sinfonica Nazionale Rai. She has performed in venues from Carnegie Hall and the Kennedy Center to the Berlin Philharmonie, the Vienna Konzerthaus, the Seoul Arts Center and the Sydney Opera House. She has made thirteen albums, all of which topped the Billboard classical charts, with repertoire ranging from Couperin to Glass. 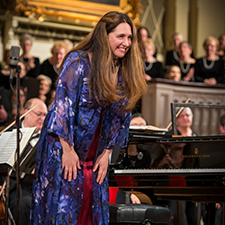 Alexis Pia Gerlach’s cello playing is lauded in the press for its “gripping emotion” and “powerful artistry”; qualities which have led to a career striking for its wide range of collaborations and artistic expressions as a solo artist and chamber musician, with performances across the United States and in 15 countries in Europe, Asia, the Middle East and South America.

Among the conductors with whom she has appeared as a soloist are Mstislav Rostropovich at the Evian Festival in France, James DePreist at Avery Fisher Hall, and Peter Oundjian at Caramoor with the Orchestra of St. Luke’s.

As the founding cellist of Trio Solisti, which was described by The New Yorker as “the most exciting piano trio in America,” Ms. Gerlach performed for 19 years at major American venues and series, recorded extensively, and gave the premieres of many new works, including the Pulitzer Prize-winning “Tempest Fantasy” by Paul Moravec. In addition, Ms. Gerlach was a founding member of the sextet Concertante, with which she toured for 15 years throughout the US, and recorded much of the string sextet repertoire.

A frequent collaborator with dancers, Ms. Gerlach collaborated as solo cellist with the Paul Taylor Dance Company on tour in India and at New York’s City Center, and in a duo with New York City Ballet principal dancer, Damian Woetzel.

Ms. Gerlach has performed at many chamber music festivals, including Marlboro, Aspen, Caramoor, Bridgehampton and La Musica di Asolo, and as a guest artist with the Chamber Music Society of Lincoln Center. With Musicians From Marlboro, she has toured both in the US and internationally.

Ms. Gerlach’s performances this year include an all-Bach recital with pianist Simone Dinnerstein at the Miller Theatre in New York, the premiere of Richard Danielpour’s “Standing Witness” with mezzo-soprano Susan Graham and Music From Copland House at Tanglewood, and the world premiere of “Forgotten Voices,” a song cycle by 15 award-winning composers using text written by homeless shelter clients, with Music Kitchen at Carnegie Hall.

Ms. Gerlach began cello lessons at school at the age of seven, and went on to study with Nancy Streetman at the Manhattan School of Music Precollege Division, and with Aldo Parisot at The Yale School of Music and The Juilliard School. 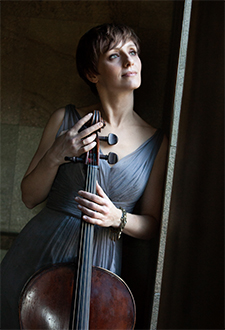 …ultimately, it is Dinnerstein’s unreserved identification with every note she plays that makes her performance so spellbinding.