Pre-concert lecture on the program to be given by Holy Cross professor Megan Ross at 7:00 PM in Washburn Hall (Mechanics Hall 2nd floor). Free and open to all ticket-holders.

Formed by the Council of Ministers of Ukraine in November of 1918, the National Symphony Orchestra of Ukraine is considered to be one of the finest symphony orchestras in Eastern Europe.

The Orchestra has gained international recognition over a remarkably short period of time. After an appearance in Moscow, Dmitri Shostakovich commented: “This orchestra has as distinguished a group of performers as one would be likely to find anywhere. The ensemble of the orchestra is of the highest level. In addition, the various soloists and instrumental groups within the Orchestra play exceptionally and complement each other beautifully—as would the greatest of the world’s symphony orchestras.”

Since 1993, the NSOU has released more than 100 sound recordings which include both Ukrainian and international repertoires. Most of these recordings have received the highest international acclaim. In 1994, the Australian Broadcasting Company (ABC) rated NSOU’s recording of Boris Lyatoshynsky’s Symphonies No. 2 and No. 3 as “The Best Recording of the Year.” The CD of Silvestrov’s “Requiem for Larissa”was nominated for a Grammy Award in 2005. The CD of Bloch and Lees’ Violin Concertos was nominated for a Grammy Award four years later. The NSOU has performed in successful concert tours around the world including Australia, Eastern and Western Europe, China, Hong Kong, Iran, Japan, Kazakhstan, Lebanon, Oman, Russia, and the United Arab Emirates.

Since April of 1999, Volodymyr Sirenkohas been the Artistic Director and Chief Conductor of the NSOU. Alexander Hornostai has been its Managing Director and Producer since June 2006.

… A program rich with energy and unusually adventurous placed the National Symphony Orchestra of Ukraine in a highly favourable light when it gave its only Sydney concert during its Australian tour … This is an orchestra with many virtues. Its strings can conjure up a vibrant songfulness; the woodwinds have a fruity, penetrating ripeness; the brass could endanger the walls of Jericho; the percussion might wake the dead … 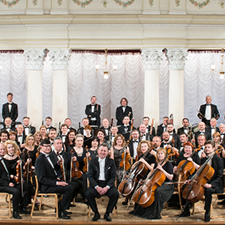